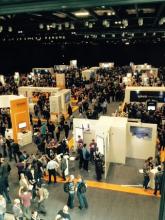 One thing that was very clear from the AWS Summit in London this month was that they had outgrown the Excel venue. The queues to get onto the escalators and up to the breakout rooms after lunch were so large that most sessions started late. Later in the afternoon they switched all the escalators to up and the only way down was a large queue for the lifts.

There were nearly 4000 people in the room for the key notes and I think it’s fair to say that I’d never been anywhere with so many geeks before – almost all of them male.

The AWS Summit is an opportunity for Amazon to show off and in particular to present some compelling customer case studies. Although they were largely preaching to the converted as the vast majority of people there were already sold on AWS.

My key quotes and points from the summit were:

Solutions Architect based in Hampshire, UK